Home
Life Stories
A Man Was Driving Through West Texas. –


A man was driving through west Texas one spring evening.

The road was deserted and he had not seen a soul for what seemed like hours.

Suddenly his car started to cough and splutter and the engine slowly died away, leaving him sitting on the side of the road in total silence.

He popped the hood and looked to see if there was anything that he could do to get it going again.

Unfortunately, he had limited knowledge of cars, so all he could do was look at the engine.

Feeling despondent as he stood looking at the gradually fading light of his flashlight, he cursed that he had not put in new batteries as he had promised himself.

Suddenly, through the inky shadows, came a deep voice,

The man raised up quickly, striking his head on the underside of the hood.

“Who said that?” he demanded.

There were two horses standing in the fenced field alongside the road and the man was amazed when the nearest of the two horses repeated,

“It’s your fuel pump. Tap it with your flashlight, and try it again.”

Confused, the man tapped the fuel pump with his flashlight, turned the key and sure enough, the engine roared to life.

He muttered a short thanks to the horse and screeched away.

When he reached the next town, he ran into the local bar.

A rancher sitting at the bar looked at the man’s ashen face and asked,

“What’s wrong, man? You look like you’ve seen a ghost.”

“It’s unbelievable,” the man said and recalled the whole tale to the rancher.

The rancher took a sip of his beer and looked thoughtful.

“A horse, you say? Was it by any chance a white horse?”

The man replied in the affirmative.

“because that black horse doesn’t know sh*t about cars.” 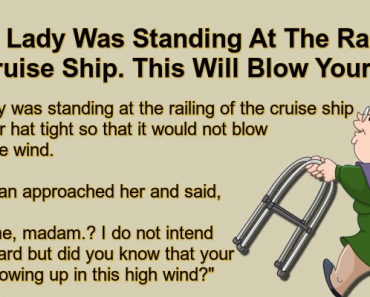