Home
Life Stories
A Wife Made A Shocking Sacrifice For Her Husband. –


John was in an accident and his face was badly burned.

The doctors couldn’t reconstruct his face with John’s own skin because he was so skinny.

But his wife said they could use hers.

The doctor decided that the best skin to be used was from her b*tt.

So they took her skin and reconstructed Johns’s face.

After the surgery he looked better than ever! His entire family was amazed, but none of them ever learned where the skin came from; they assumed it was his own.

One night John is overcome with emotion so he begins to cry and tells his wife “I love you so much. I’m so grateful for your sacrifice.”

She shrugs and says “Honey, all of the thanks I need comes when your mother kisses you on the cheek.” 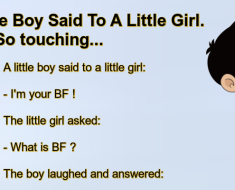