A woman named Julie finally called it quits on her occupation as a bank cleaner, which is a job she had been doing for the past 35 years. The woman left an emotional note for her boss and this got many people talking on social media. 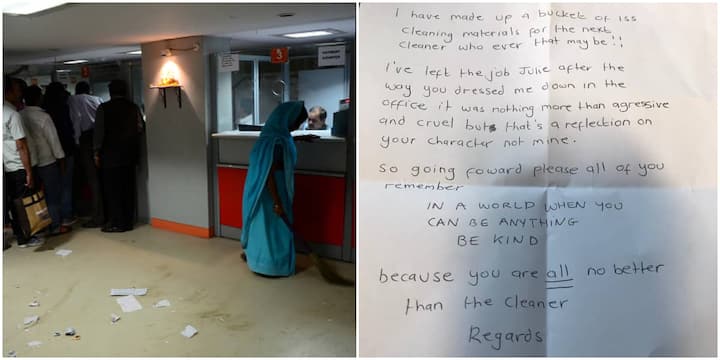 On Twitter, sharing the heartwarming note, her son, @joecousins89, wished his mum a happy retirement when he stated that she sure had the last laugh with her move against her awful boss.

The son wrote: “And this is why I love my mum. She’s been cleaning banks for 35 years and today walked out with this lovely note left for that awful manager. Happy retirement Mum – always have the last laugh eh!”

In the note, mother Julie appeared to politely sl.am her boss for what she described as ‘dressing her down’. Some social media users hailed the woman for acting maturely while others frowned at the unidentified boss.

Here are some comments from the fellow users:

“One of my male managers was repeatedly rude to our lovely cleaner. One day she calmly got up, disappeared for a few mins then reappeared with a really smug look on her face. He later discovered she’d removed the bogrolls, towels & soap from the mens loos, locked them up…”

“I’m a cleaner for the nhs in a secure mental health hospital. We’re treated as a valued members of the team. Patients trust and open up to us more than nursing staff. We are no threat to them. We play a big part in their recovery.I was a catering manager before I joined the nhs.”

“Never understood why people think what they do for a living reflects their importance. I was raised to believe that a job is a job and anyone getting up and going to work deserves the same respect, whether they pick up trash or run the company. Good for your mom! Respect!”

How about you? What do you think?