William and Mildred decided to celebrate their 40th wedding anniversary with a trip to Las Vegas.
William went to the front desk to check them in while Mildred stayed with the car.
As he was leaving the lobby, a young woman dressed in a very short skirt introduced herself as Candie.
William brushed her off.
When William and Mildred got to their room, he told her that he’d been approached by a prost!tute.
“I don’t believe you,” laughed Mildred.
“I’ll prove it,” said William.
He called down to the desk and asked for Candie to come to room 1217.
“Now,” he said,
“you hide in the bathroom with the door open just enough to hear us.”
Soon, there was a knock on the door.
Candie walked in, swirling her hips provocatively.
“So, I see you’re interested after all,” she said.
William asked, “How much do you charge?”
“$125 basic rate, $100 tips for special services.”
William was taken aback.
“$125! I was thinking more in the range of $25.”
Candie laughed.
“You must really be an old-timer if you think you can buy sex for that price.”
“Well,” said William,
“I guess we can’t do business. Goodbye.”
After she left, Mildred came out of the bathroom. “I just can’t believe it.”
William said, “Let’s go have a drink and forget it. “
Back downstairs at the bar, the old couple sipped their cocktails.
Candie came up behind William, pointed at Mildred, and said,
“See what you get for $25?” 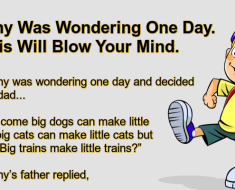