Home
Life Stories
Don’t Mess With the Wife From Texas

Finding the right woman isn’t easy. And honestly, nowadays, wives don’t get ‘orders’ from their husbands, which is totally fine as partners should equally be responsible for all those tasks that come with keeping the house clean.

But what happens when when you ask your wife to do the dishes and the house cleaning? Three friends who married girls from different parts of the world did that and we can’t stop laughing because of one of the woman’s reactions. I guess that is what you get when marrying a Texas girl. This is hilarious!

Three friends married women from different parts of the world.

The first man married a Greek girl. He told her that she was to do the dishes and house cleaning. It took a couple of days, but on the third day, he came home to see a clean house and dishes washed and put away.

The second man married a Thai. He gave his wife orders that she was to do all the cleaning, dishes and the cooking. The first day he didn’t see any results, but the next day he saw it was better. By the third day, he saw his house was clean, the dishes were done, and there was a huge dinner on the table.

The third man married a girl from Texas. He ordered her to keep the house cleaned, dishes washed, laundry washed, and hot meals on the table for every meal.

He still has some difficulty when he pees.

Please Share On Facebook/Pinterest Don’t Mess With the Wife From Texas Clicky News Wake Up Your Mind. 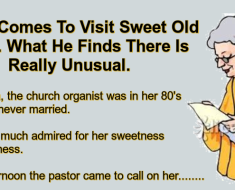