Guys listen to me. A good woman is worth the investment.

And don’t believe all the Hollywood crap where a woman who is in love with you will stay faithful to you through anything. She will wait and wait for you to figure out what you want from life, build your career, or try to see what else is out there until you finally decide to settle down with her and live happily ever after.

Well, it would be awesome if we were living in a romantic comedy. But the reality is different. Nowadays, a woman will give you a chance. Maybe a second, third, or even a fifth chance.

But, when she decides she is done, man – she is really done! And there is nothing you can do to change her mind.

You will regret losing her because she was the kind of girl who would be racing to send you a reply on her phone because she didn’t want you to think that she was making you wait.

She is going to choose to love someone who loves her back just as much as something that you never did for her. You might cross paths a few more times in the future, but it won’t matter much to her. She might not even take notice of you because she’s too happy with the love that she has now. She will look like that same girl who once loved you but with one significant difference, she loves someone else now.

Because when she found out that you would never be willing to give her the love that she gave you, then she just chose to devote all of that love to herself instead. And she became infinitely happier as a result. You are going to notice confidence in her that you’ve never seen before the same kind of confidence that you threatened every single day you were together.

And when you start to take notice of the fact that she’s more sure about herself, you’re going to feel a pinch of regret. You’re going to kick yourself for not loving her the way that she deserved to be loved. You’re going to regret losing a girl who only wanted to love you.

You’re going to miss her so much but you’re never going to get the chance to win her back. You are going to grow regretful of the way that she chose to love you convincingly and wholeheartedly. She was the kind of girl who would always be ready to talk about you and make you the center of attention in the relationship.

And in these moments of vulnerability, your feelings and emotions are going to come crashing down on you like a fallen building. You’re going to be remorseful at the idea of you never find another girl who will love you the way that she did. You are going to be sad at the fact that you’ve just lost a girl who deserved so much more than you ever gave her. You’re going to regret losing the girl who loves you too much.

And now you’re just going to wallow in your sadness. You’re just going to drown in your sea of regret because there’s not much you can do to win her back. She’s chosen to move on and she’s happy because of it. In this scenario, you are the one who came out as the loser.

You have to move on but it’s going to be so much harder for you. Because really, how can anyone ever move on from the one person who loved them in ways that no one else ever could or ever will? She was one of a kind. And you let her go.

Well, you’ve made your bed, now lie in it.

Please Share On Facebook/Pinterest Every man needs a good woman Clicky News Wake Up Your Mind. 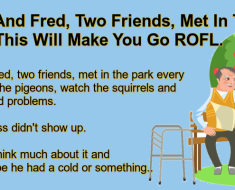