Home
Life Stories
Get “Out of this property, you Nazis,” yelled pastor who threw police out from church during Easter ceremony 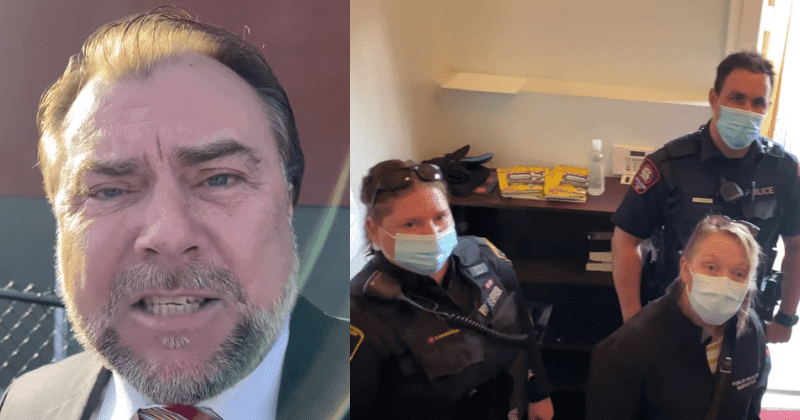 The police were trying to check whether public health orders were being followed, but they didn’t get a chance to do their job because the pastor flew into a fit of rage.

Those attending Easter ceremonies at a church in Calgary saw the service get interrupted when the pastor flew into a fit of rage and kicked out police officers for entering the church premises.

The controversial pastor, Artur Pawlowski, chased away the police with his verbal rant and called the uniformed officers “Nazis” while they were conducting a check to ensure whether Covid-19 guidelines were being followed. In the end, the police had no choice but to cave and leave the church after seeing the pastor yell over and over again, paying no heed to what they had to say.

“Immediately go out and don’t come back,” shouted the pastor at the six officers, as reported by Calgary Herald. “I don’t care what you have to say. Out! Out! Out of this property, you Nazis,” Pawlowski continued.

As the police were captured walking away in the viral video, Pawlowski was then seen turning the camera on himself and calling the officers, “sick psychopaths.” In the video that he uploaded himself online, the pastor accused the officers of “coming to intimidate Christians during the holiest festival.”

Several times in the past, the controversial pastor was fined on different occasions for not following public health orders, but this time, as members of Pawlowski’s church in Canada gathered for a Passover service, the pastor was not issued any ticket by the officers.

While speaking to Toronto Sun, the 48-year-old pastor claimed that he had to draw the line with having guns inside the church, and he tried to justify his violent outburst. “This is a place of worship and no place for weapons,” Pawlowski said. “We have people praying here.  They were scaring the kids. This was passover. This is Easter.”

During his childhood days in Poland, Pawlowski heard stories about the Nazi regime, and he claimed that seeing the police at the church on Saturday, right before Easter Sunday, reminded him of those stories and made him call the officers “Nazis.”

“I grew up under communism and my grandparents lived under the Nazis,” he said. “My family escaped the communists in Poland and first went to Greece and then to Canada to get away from it. There were millions of Jewish people murdered in Poland including at Auschwitz.”

On the other hand, the Calgary Police Service released a statement after the incident, talking about how the officers were just doing their job to ensure people were following public health orders for their own good. “The concern was that the people in attendance were not adhering to the government’s COVID-19 public health orders, which are in place to ensure everyone’s safety.