Home
Life Stories
Golden Retriever Is So Gentle With Baby Bunnies That They Adopt Him As Their Mama. 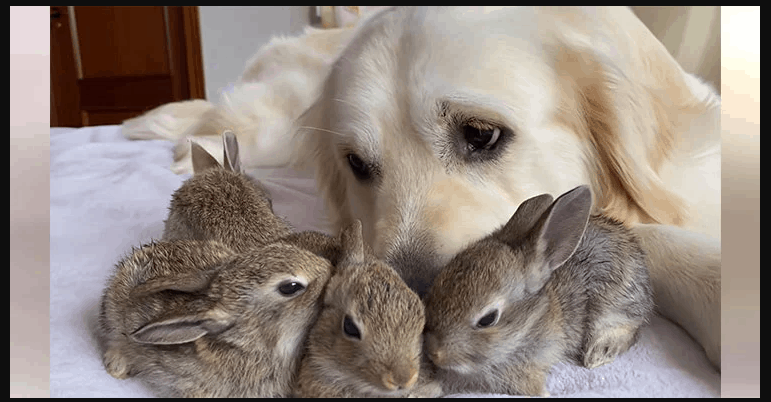 We adore a good interspecies love story, and this is just about the cutest one we’ve ever seen! Bailey is a golden retriever who lives in Costa del Sol, Spain, with his favorite human, Taras. Taras often shares videos of the pup on his YouTube channel, which has grown to include over 244,000 fans.

In May 2020, Bailey’s popularity grew even more thanks to the heartwarming friendship he formed with four 22-day-old bunny rabbits. Taras said the bunnies and Charlotte, their mother, were rescued “from the hands of people who catch rabbits in private homes.” He explained that as soon as he brought them home, the bunnies formed a close bond with Bailey “because he is very kind to them and he loves them very much.”

The little ones even began sharing their food with their gigantic furry friend, and Bailey rewarded them by stealing their hay and giving them vigorous baths that left their fur spiky with puppy love. It’s no wonder their antics have been viewed more than 9.4 million times! Watch Bailey and his baby bunnies cuddle up in the video below, and don’t forget to share this adorable story.