Home
Life Stories
Meghan McCain Claps Back At Nasty Headline, Says Women Need To ‘Lift One Another Up’

Meghan McCain just got really real on Instagram. The View cohost is definitely used to speaking her mind at all costs. But she just got more upfront than ever about a recent headline that was written about the return of The View. Mainly, it called out Meghan by saying that while viewers were pumped about the show coming back, they weren’t excited to see Meghan on it for another season. The title read: “The View Sets Return Date, Fans Excited for Comeback but Not for Meghan McCain.”

Meghan simply wasn’t having it, and she used it as an opportunity to speak about how women are treated poorly, even vilified, simply for doing their jobs in the media. She began her passionate and lengthy post by writing, “I don’t normally comment on garbage written but this is an example why our culture is so deeply toxic for women – no man would EVER have this kind of a headline written who cohosts the #1 talk show in America that just won an Emmy for best show.”

As she continued on, she urged people to change the way we speak to, and about, one another. “Do better, be better, lift women up instead of tearing strong ones down. We are punished for being tough, opinionated and not backing down while men are celebrated for it. You want to know why we still don’t have a woman president although it’s WELL past time? Because we raise women to be strong, independent, smart, empowered and to speak their mind and then turn around and viciously punish them once they do.”

No matter how you feel about Meghan or her politics, you can never say that she doesn’t know how to make her point. She ended her post by writing, “Also, I will see you back on the show the 8th.” Chances are, we’re going to hear more from Meghan on the issue then.

For more on the story and what Meghan had to say, watch the video.

Please Share On Facebook/Pinterest Meghan McCain Claps Back At Nasty Headline, Says Women Need To ‘Lift One Another Up’ Clicky News LittleThings. 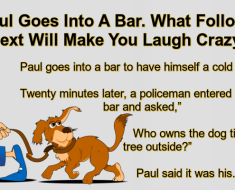