Time and time again, dogs prove themselves the most valuable of companions to humans.

Any doubters of that need look no further than Penny the pitbull, who recently stayed by a missing toddler’s side for two whole days before she was found.

In an act of instinctual love, the dog refused to abandon two-year-old Charlee Campbell when she wandered off into the woods. Campbell’s family are now hailing Penny a hero. 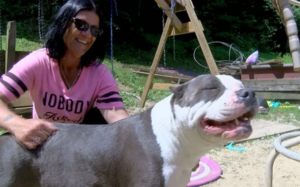 According to reports, Charlee Campbell disappeared when she wandered into the woods in Lebanon Junction, Kentucky, prompting a 48 hour search by authorities.

The little girl’s family were left to fret as two days past before she was found, though in the midst of despair an unlikely hero emerged.

Enter Penny the pitbull, the dog who’s now being hailed as a hero after keeping watch over Charlee while she was lost. 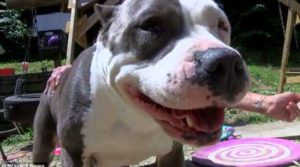 Speaking to WIS-TV, Charlee’s grandmother said: “This is our hero right here. When my dog didn’t come home, and my baby wasn’t home, she was not going to leave that baby until she got here.
“I can’t even explain how happy I am that this baby is home, because I love her more than anything in this world.”

As per the Bullitt County Sheriff’s Office, the dog arrived home moments before Charlee was discovered by local resident Wayne Brown.

“Charlee’s amazing survival story continued tonight when she walked up on a porch on Roy Layne Road this evening,” read the update on the Sheriff’s Office’s Facebook page.

“The homeowners realised who she was and contacted authorities. Ironically, her dog returned home on its own a few minutes prior to Charlee approaching the homeowners.”
Brown, the resident who found Charlee, said: “I saw the dirt all over her, and she had leaves in her hair, and I opened the door, and I said, ‘Are you Charlee?’.

“And she handed me this bottle. And I said, ‘Are you Charlee?’. She didn’t answer me. She wouldn’t say anything.” 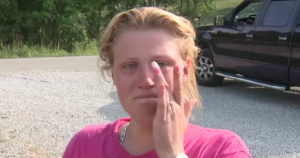 Charlee was taken to hospital shortly after her reappearance, where she was checked for injuries. Fortunately, aside from being dehydrated and suffering from tick bites, she appears to be no worse for wear after her two day stint in the woods.

An investigation is set to take place into her disappearance, with Child Protective Services now involved.
You can see the mom’s emotional reaction after her daughter was found, in the video below:

As usual, we’re left to ask the age-old question: What did humans do to deserve dogs?

Who knows what might have happened to Charlee had Penny the pitbull not been there to watch over her during her time in the woods. Share this story to pay tribute to all the brave, loyal dogs out there!