For anyone who are already seasoned gardeners, they may be interested in adding more color to their yard and what better way than with these stunning roses. Images of these beautiful flowers have gone viral and just what we need to see during these challenging times. Reportedly, this is Osiria rose. There are 150 different varieties of rose but what makes the Osiria rose different from others is its blend of two striking colors.

Sometimes referred to as a hybrid tea rose they aren’t a common sight in gardens but now the seeds are available to buy. Originally, this stunning rose was bred by Reimer Kordes in 1978 in Germany and then introduced to France.

It is believed by some people that the rose gets its name from Osiris, the Egyptian god of fertility and agriculture while others think it’s named after a sunken empire similar to Atlantis called Osiria. Whatever the correct idea behind this flower’s name, the way it was created remains as much of a mystery as those that fashioned these hybrid flowers because they like to keep their methods secret to protect their introduction.

The Osiria rose has a strong fragrance with pretty petals displaying swirls of creamy white and cherry red. 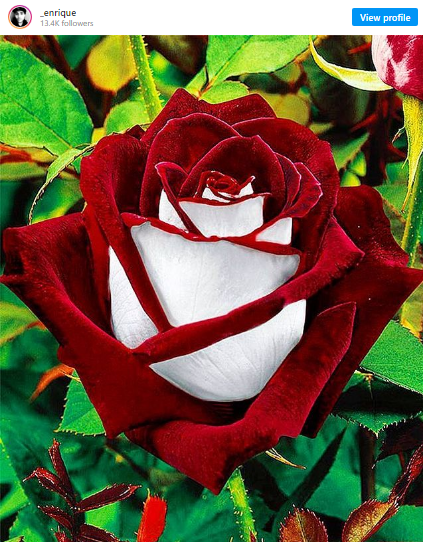 However, it is warned by some experts that these flowers are not only difficult to grow but may not turn out as expected.

One gardening enthusiast wrote on her website: “Unfortunately, many of the images, on the internet, of the rose are highly photoshopped for dramatic purposes. The colors in real life are not quite so dramatic, it seems,”

To grow these beautiful blooms, you are advised to plant them in beds and borders, plant in full sun and pruning every spring. You must deadhead regularly and don’t expect a lot of blooms immediately.