It has often been said that the only two things that are certain in the life we live are “death and taxes.” Perhaps you have even seen the truthfulness of that saying. Of course, having to pay taxes is nothing that any of us want to do personally but it is something that seems to come on an annual basis. We may even worry if we get a letter in the mail or if anyone happens to bring up the IRS because they are one of the most feared organizations on the face of the earth. That being said, one father who had a bone to pick with the IRS wasn’t afraid to do it and he did so, as you can read in the following joke 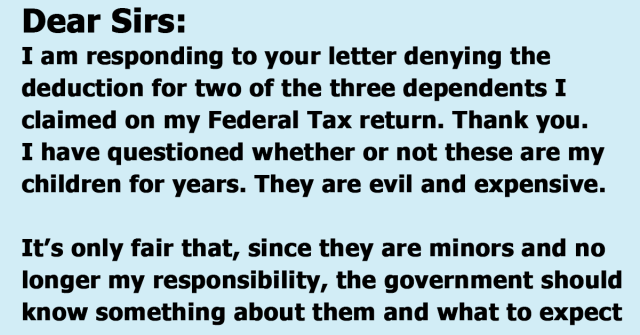 I am responding to your letter denying the deduction for two of the three dependents I claimed on my Federal Tax return. Thank you. I have questioned whether or not these are my children for years. They are evil and expensive. It’s only fair that, since they are minors and no longer my responsibility, the government should know something about them and what to expect over the next year. Please do not try to reassign them to me next year and reinstate the deduction. They are yours!

The oldest, Kristen, is now 17. She is brilliant. Ask her! I suggest you put her to work in your office where she can answer people’s questions about their returns. While she has no formal training, it has not seemed to hamper her mastery of any subject you can name. Taxes should be a breeze. Next year she is going to college. I think it’s wonderful that you will now be responsible for that little expense.

While you mull that over, keep in mind that she has a truck. It doesn’t run at the moment, so you have the choice of appropriating some Department of Defense funds to fix the vehicle, or getting up early to drive her to school. Kristen also has a boyfriend.

Oh, joy! While she possesses all of the wisdom of the universe, her alleged mother and I have felt it best to occasionally remind her of the virtues of abstinence, or in the face of overwhelming passion, safe sex. This is always uncomfortable, and I am quite relieved you will be handling this in the future. May I suggest that you reinstate Dr. Jocelyn Elders who had a rather good handle on the problem?

Patrick is 14. I’ve had my suspicions about this one. His eyes are a little closer together than those of normal people. He may be a tax examiner himself one day if he is not incarcerated first. In February, I was awakened at three in the morning by a police officer who was bringing Pat home. He and his friends were TP’ing houses. In the future, would you like him delivered to the local IRS office, or to Ogden, UT?

Kids at 14 will do almost anything on a dare. His hair is purple. Permanent dye, temporary dye, what’s the big deal? Learn to deal with it. You’ll have plenty of time, as he is sitting out a few days of school after instigating a food fight in the cafeteria.

I’ll take care of filing your phone number with the vice-principal. Oh yes, he and all of his friends have raging hormones. This is the house of testosterone and it will be much more peaceful when he lives in your home. DO NOT leave him or his friends unsupervised with girls, explosives, inflammable, inflatables, vehicles, or telephones. (They find telephones a source of unimaginable amusement. Be sure to lock out the 900 and 976 numbers!)

Heather is an alien. She slid through a time warp and appeared as if by magic one year. I’m sure this one is yours. She is 10 going on 21. She came from a bad trip in the sixties. She wears tie-dyed clothes, beads, sandals, and hair that looks like Tiny Tim’s. Fortunately, you will be raising my taxes to help offset the pinch of her remedial reading courses. “Hooked On Phonics” is expensive, so the schools dropped it.

But here’s the good news! You can buy it yourself for half the amount of the deduction that you are denying me! It’s quite obvious that we were terrible parents (ask the other two). She cannot speak English. Most people under twenty understand the curious patois she fashioned out of valley girls/boys in the hood/reggae/yuppie/political doublespeak.

The school sends her to a speech pathologist who has her roll her “r’s.” It added a refreshing Mexican/Irish touch to her voice. She wears hats backward, baggy pants, and wants one of her ears pierced four more times. There is a fascination with tattoos that worries me, but I am sure that you can handle it. Bring a truck when you come to get her, she sort of “nests” in her room and I think that it would be easier to move the entire thing than find out what it is really made of.

You denied two of the three exemptions, so it is only fair that you get to pick which two you will take. I prefer that you take the youngest two, I will still go bankrupt with Kristen’s college, but then I am free! If you take the two oldest, then I still have time for counseling before Heather becomes a teenager. If you take the two girls, then I won’t feel so bad about putting Patrick in a military academy.

Please let me know of your decision as soon as possible, as I have already increased the withholding on my W-4 to cover the $395 in additional tax and made a down payment on an airplane.

Note: The IRS allowed the deductions and reinstated his refund.