Home
Life Stories
The Men Who Came In Had Eight Children. –


A population control program had been introduced to the island, but the medical men were having trouble getting the women to take their birth control pills,

They decided, therefore, to concentrate on teaching the men to wear c0ndoms.

One of the men who came in had had eight children in eight years, and the doctor told him that he absolutely had to wear a sheath.

He explained that as long as he wore it his woman could not have another baby.

About a month later, the wife came in and she was pregnant.

The doctor got very angry.

He called the man in and gave him a long lecture through an interpreter.

He asked the man why he hadn’t worn the sheath.

“He swears he did wear it. He never took it off.”

The doctor shook his head.

“In that case, ask him how in the hell his wife is pregnant again?”

“He says,” said the interpreter,

“that after six days he had to take a p!ss so badly that he cut the end off.” 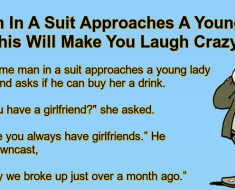