Home
Life Stories
Two Men Are Hunting In The Woods. –


Two men are hunting in the woods when suddenly they encounter a bear.

One of the hunters begins running away and the bear is heading toward him:

About half a mile later, the man jumps to the side, and the bear slides right on by.

He quickly runs back, but the bear turns around and pursues him yet again.

Eventually, the man manages to find a spot to jump to the side again and once again the bear slides right on by.

He reaches a cliff, steps to the side, and the bear slides off the edge and lands into the water below, breaking its neck upon impact.

The other hunter shows up and says.

“Man if that were me in that situation, I would’ve sh*t myself big time.”

“What do you think that bear was sliding in?” 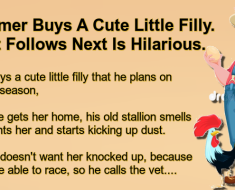