Home
Life Stories
Woman Hit Man With Car And Left Him Lying In Road Before Driving Away. Now, He’s Thanking Her.

One year after he almost died during a hit-and-run collision, David Montoya is thanking the woman who nearly took his life.

In August of 2019, David Montoya was riding his scooter when a female driver made an illegal turn in front of him, causing him crash right into her vehicle.

David was left lifeless on the pavement as the driver who hit him drove off just as soon as bystanders ran to his side to help him.

Though he has no memory of the accident, he has seen the surreal surveillance footage showing the horrific wreck.

The driver left him there with horrendous injuries. He suffered head trauma, broken bones, and collapsed lungs. His ear was literally hanging off.

David arrived at the hospital on the brink of death. Doctors had to put a metal bar inside his body, all the way up to his waist.

For months he lived in the ICU, confined to a respite bed.

Things didn’t get much better after David was released from the hospital. He and his partner soon found themselves homeless and struggling to pay the bills. He fell into a pattern of depression and substance abuse.

It would be pretty understandable if David hates the woman who nearly claimed his life in a hit-and-run, and hopes he never comes into contact with her ever again.

One year after the accident, David has a message for her — and it may surprise you.

Please Share On Facebook/Pinterest Woman Hit Man With Car And Left Him Lying In Road Before Driving Away. Now, He’s Thanking Her. Clicky News LittleThings. 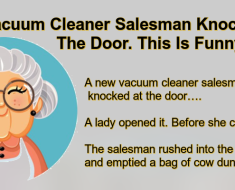