Home
Life Stories
Woman Nods And Silently Walks Out Following A Surprise Proposal: ‘It Was Such A Disappointment’

Marriage proposals can be tricky. For starters, the person doing the proposing should probably make sure that they’ve discussed the idea of getting married with their partner at least a little bit. It would be awful to assume someone wants to marry you only to be turned down. Some couples also want to plan their proposal together, so it’s important to know if your partner wants to be in on the planning process.

One woman recently shared with Reddit that she and her boyfriend of three years have had a lot of conversations about how he would propose to her. She is fully on board with getting married, and has been looking forward to the proposal for about a year.

“One of the things we discussed a year ago was ideas about how he wanted to propose. He talked about a proposal in the mountains, or in a forest; something outdoors, simple but romantic to us. I was very happy and excited, not to mention we live between mountains and forests so it was also easily accessible.”

Sounds dreamy, right? Except … that’s not how the proposal went.

Please Share On Facebook/Pinterest Woman Nods And Silently Walks Out Following A Surprise Proposal: ‘It Was Such A Disappointment’ Clicky News LittleThings. 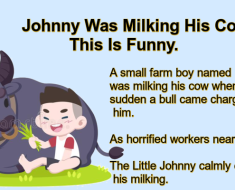