The tender moment when a 6-year-old boy said goodnight to his little sister for the last time was caught on camera and is breaking hearts around the world.

Matt Sooter, from Arkansas, took the picture of his 4-year-old daughter Adalynn “Addy” who was diagnosed with a rare form of cancer.

“A little boy should not have to say goodbye to his partner in crime, his play mate, his best friend, his little sister,” Matt wrote.

More than 8,000 people reacted to the hearbreaking photo. Now the parents want to raise awareness about this rare disease.
The Sooter family’s world was turned upside down when they were told in November 2016 that their daughter had Diffuse Intrinsic Pontine Glioma (DIPG), a rare tumor that starts in the brainstem.

Addy would have to live with the growing tumor for 18 months until her symptoms got worse.

“Addy’s symptoms have progressed rapidly over the past day and a half. Yesterday she woke up as her spunky playful self. While we still see short instances of our girl she can no longer eat or swallow without difficulty and she’s sleeping most of the time now and we’ve admitted her into inpatient care. Most likely she doesn’t have much time left,” he wrote on Facebook.

Big brother didn’t want to leave his sister
In an incredibly emotional and heartbreaking post, he invited all those friends and relatives who wanted to say a final farewell to their beloved daughter to contact them.

Matt also asked followers to pray for big brother Jackson, who didn’t want to leave his sister’s side.

Just a short time after Jackson had said goodnight to his little sister and told her he loved her, she passed away.

‘Sweet girl loved helping people’
Just hours after, a post on the Facebook page Hope for Addy Joy – Fighting DIPG, the family announced the passing of their daughter.

“She passed from this life to the next just as she had lived: stubbornly but also peacefully, and surrounded by family. She wasn’t in any pain at the end,” it read.

“While this is only goodbye for now we miss our baby girl terribly.”

The family donated Addy’s tumors, both brain and spine, to scientific research in “hopes of saving future children from a similar fate.

“Our sweet girl loved helping people and giving gifts so we thought this would be an excellent way of showing her giving heart,” they wrote in a Facebook post. 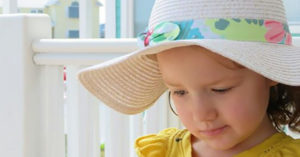 We all know someone who has been affected by this awful disease but it’s particularly upsetting when it affects children.