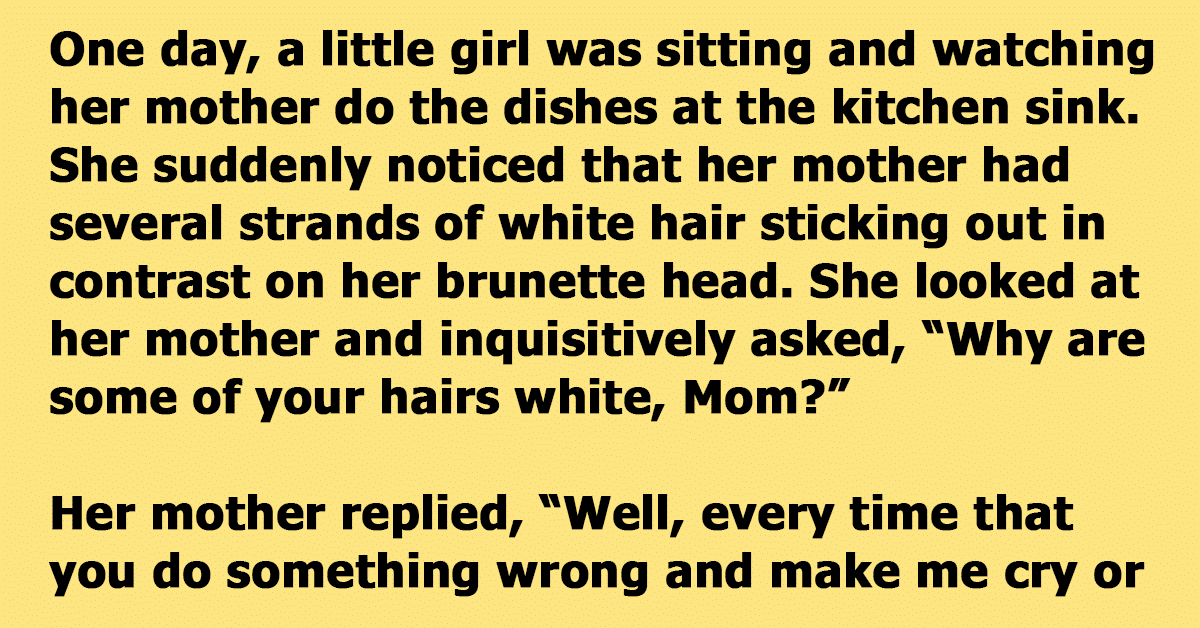 1. A Kindergarten teacher was observing her classroom of children while they were drawing. She would occasionally walk around to see each child’s work. As she got to one little girl who was working diligently, she asked what the drawing was. The girl replied, “I’m drawing God.” The teacher paused and said, “But no one knows what God looks like.” Without missing a beat or looking up from her drawing, the girl replied, “They will in a minute.”

3. A Sunday school teacher was discussing the Ten Commandments with her five and six-year-olds. After explaining the commandment to “honor” thy Father and thy Mother, she asked, “Is there a commandment that teaches us how to treat our brothers and sisters?” Without missing a beat, one little boy, the oldest of a family, answered, “Thou shalt not kill.”

4. One day, a little girl was sitting and watching her mother do the dishes at the kitchen sink. She suddenly noticed that her mother had several strands of white hair sticking out in contrast on her brunette head. She looked at her mother and inquisitively asked, “Why are some of your hairs white, Mom?”

Her mother replied, “Well, every time that you do something wrong and make me cry or unhappy, one of my hairs turns white.”

The little girl thought about this revelation for a while and then said, “Momma, how come ALL of grandma’s hairs are white?”

5. The children had all been photographed, and the teacher was trying to persuade them each to buy a copy of the group picture. “Just think how nice it will be to look at it when you are all grown up and say, ‘There’s Jennifer; she’s a lawyer,’ or ‘That’s Michael; he’s a doctor.” A small voice at the back of the room rang out, “And there’s the teacher, she’s dead.”

6. A teacher was giving a lesson on the circulation of blood. Trying to make the matter clearer, she said, “Now, class, if I stood on my head, the blood, as you know, would run into it, and I would turn red in the face.” “Yes,” the class said. “Then why is it that while I am standing upright in the ordinary position, the blood doesn’t run into my feet?” A little fellow shouted, “Cause your feet ain’t empty.”

8. A woman was trying hard to get the ketchup to come out of the bottle. During her struggle, the phone rang, so she asked her four-year-old daughter to answer the phone. “It’s the minister, Mommy,” the child said to her mother. Then she added, “Mommy can’t come to the phone right now. She’s hitting the bottle.”