Home
Life Stories
A Teacher Realized That One Of His Students Had Just Stayed Idle. –


On break time, a teacher realized that one of his students had just stayed idle like a desolated statue.

Wanting to at least cheer him up, the teacher went where the kid was and sat down beside him and said,

“Johnny, what’s wrong with you? Are you sick?”

“No.” He said shaking his head.

“I just wanna be alone.”

“Great, so what’s part one about?”

“My mom and dad were travelling to a camping site yesterday. On their way there, they reached a junction where the road was splitting up. Dad looked at my mom and said, ‘honey, we’re gonna take the right turn’ but my mom protested and said, ‘no, this road is too muddy! Take the right turn!’ Quickly, dad slapped my mom and asked her, ‘who is driving? Is it you or me?’ “

“Damn! That was harsh.” Said the teacher.

“Really? If you only knew about what happened in part two.”

“Okay, what happened in the second part?”

“When they arrived to the camping site, my dad went straight fishing and mom was home. Dad returned about an hour later with five tilapia fish which got my mom very happy and she said to him, ‘well done honey, bring them here so I can boil them for you and make you some soup.’ However, my dad protested saying, ‘no. No. No honey, I don’t want boiled fish, grill them a bit and fry them later…’ before he could even finish a hot slap landed on to his face and then my mom asked him, ‘who is cooking? Is it you or me?’.”

Johnny laughed and said, “me too, but now I wanna start telling you about what happened in the fourth part. You’ll like it I bet you…” the teacher cut him off.

“Why the fourth part? Tell me about what happened in the third part first.” Said the teacher before a surprisingly hot slap landed on her face.

“Dammit Johnny! What was that for?”

Johnny laughed at her and said,

“who is telling the story? Is it you or me?” 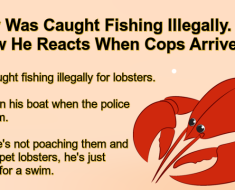