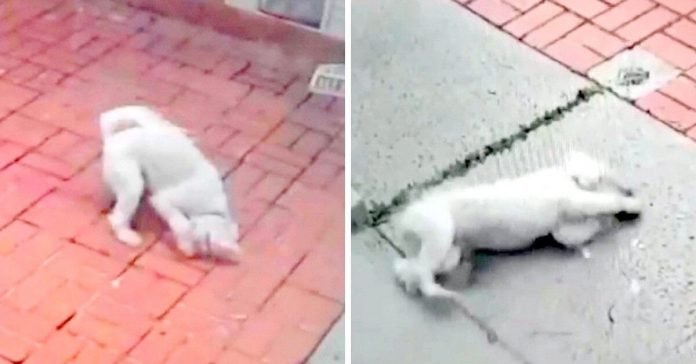 When Alfonso Galindo, a California dad and dog owner, watched some surveillance video recently, he discovered a terrible secret about exactly who had been harming his poodle mix dog named Pupa.

Alfonso says he was heartbroken to discover that a postal carrier has allegedly been pepper spraying his 7-year old rescue dog, not only causing harm to the canine but also to his two children, Alfonso Jr., 3, and 1-year-old Regina, who are usually never far from the family’s beloved pet.

The family’s investigation as to what had been going on began when they started noticing strange stains on their patio, along with red and irritated eyes on Pupa.

hat’s when Dad thought it was a good idea to begin reviewing what the cameras he had recently had installed for home security were capturing.

That’s when he discovered that the same mail carrier who deliver mail to his house was spraying Pupa with pepper spray.

Pupa is seen on the video writhing in pain and starting to convulse just after exposure to the pepper spray.

Alfonso said seeing his dog attacked for no reason made him sick to his stomach.

But the situation gets worse.

The distraught California father says that after reviewing four weeks worth of video, he found no less than nine different times that the dog is writhing in pain after the postal carrier delivers the mail, a very strange coincidence.

But now Alfonso, Sr. believes that the postman has been directly spraying pepper spray into his poor dog’s face.

But the dog wasn’t the only victim of the postal carrier’s malicious acts.

Both of Alfonso, Sr.’s two children, who are always in close contact with Pupa, have developed respiratory problems during this same timeframe.

This has resulted in dad having to take them to the hospital’s emergency room or an urgent care center numerous times, resulting in expensive medications.

Alfonso is more than angry at just who has caused health problems for both his dog and his children and says he is livid that the United States Postal Service and its employees can no longer be trusted.

Not only has he filed an official complaint with the U.S. Postal service, he has also contacted his local police station to file a report, believing that the postal carrier’s actions are criminal in nature.

A spokesman for the USPS says they have begun an investigation into the matter.