That’s one test that’s going to stick with him! 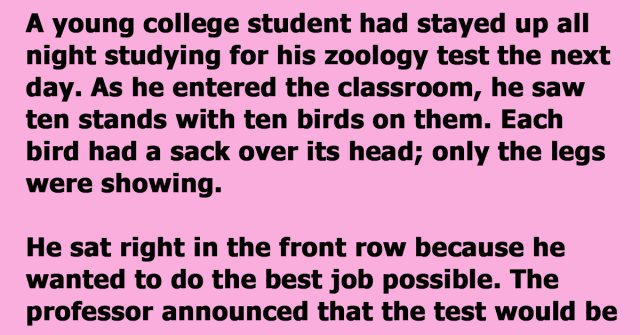 A young college student had stayed up all night studying for his zoology test the next day. As he entered the classroom, he saw ten stands with ten birds on them. Each bird had a sack over its head; only the legs were showing.

He sat right in the front row because he wanted to do the best job possible. The professor announced that the test would be to look at each of the birds’ legs and give the common name, habitat, genus, and species.

The student looked at each of the birds’ legs. They all looked the same to him. He began to get upset. He had stayed up all night studying and now had to identify birds by their legs. The more he thought about it the madder he got.

The professor was surprised. The class was so big that he didn’t know every student’s name so as the student reached the door the professor called, “mister, what’s your name?”

The enraged student pulled up his pant legs and said, “You tell me, buddy! You tell me!”