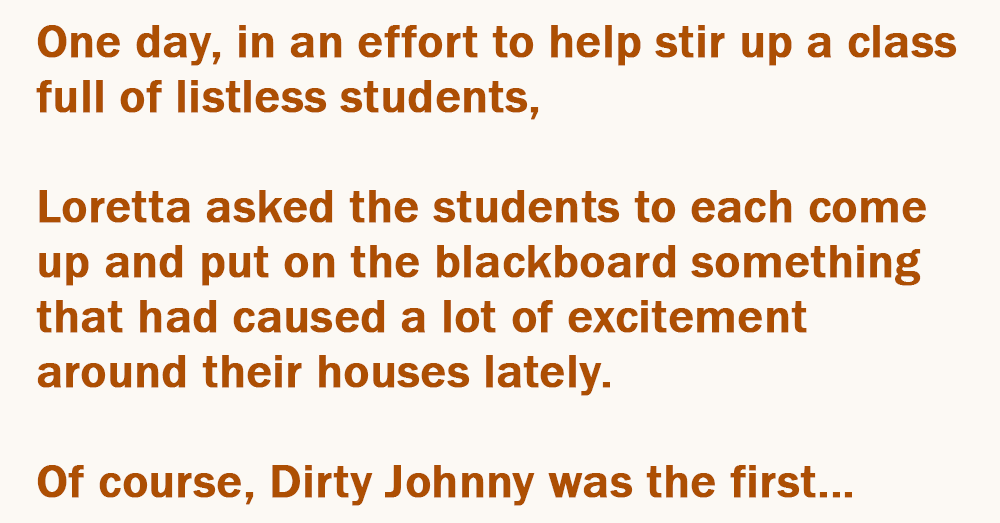 One day, in an effort to help stir up a class full of listless students,

Loretta asked the students to each come up and put on the blackboard something that had caused a lot of excitement around their houses lately.

Of course, Dirty Johnny was the first student to raise his hand, but Loretta knew he was going to write something dirty, so she called on Nancy instead.

Nancy went up to the board and drew a flower, stating that the flowers they’d planted that spring were all blooming, and that was causing a lot of excitement around their house.

Again, Dirty Johnny is waving up a storm in the back of the room, but Loretta doesn’t want to call on him because he’s going to write something dirty.

Instead, she calls on little Timmy, who goes up to the board and draws a stick figure of an animal.

What kind of animal is that?’ asks Loretta.

‘ That’s a puppy,’ says Timmy. ‘We just got one of those, and it’s caused a lot of excitement around our house lately.’

Now Dirty Johnny is waving more than ever: finally unable to ignore him any longer, Loretta says, ‘Okay, Johnny, you’re next.’

Dirty Johnny goes up to the front of the classroom and draws a single dot on the board.

‘What’s that?’ she asks (afraid of what the answer is going to be).

‘My sister’s missed two of those, and you can bet that’s caused a lot of excitement around OUR house!’