Dogs are always stealing things they shouldn’t be… food, socks, another dog, you name it, chances are a dog has tried to get away with it.

A Twitter user identified as Eunice, shared photos of her dog, Maggie’s attempt to steal her father’s dentures. Unfortunately for Maggie, hiding a pair of dentures is a difficult task for a Shih Tzu.
Eunice wrote that one day her father took his dentures out in the middle of the afternoon because his gums had been hurting him.

At some point he fell asleep, and Maggie saw an opportunity.

She popped those suckers right into her own mouth! 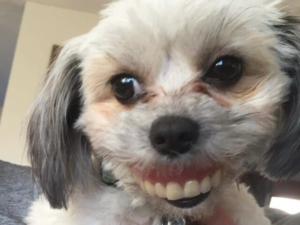 Eunice told BuzzFeed News that when her father woke up from his nap he discovered Maggie under the living room table sporting the new pearly whites.

“I was in tears laughing and showing all of my coworkers,” she said when her dad texted her the photos of Maggie.

You guyssss! A few months ago my dog, Maggie, stole my dads dentures while he was napping (his gums had been hurting him so he took them out mid-afternoon) and he found her like this. Lmfaooo im deadddd rn remembering this @dog_feelings @dog_rates pic.twitter.com/lz9WIKFJEg

Even though it took Eunice a “few months” to share the hilarious photos of Maggie wearing Eunice’s father’s dentures on Twitter, they have since been retweeted over 50,000 times.

In the end everything worked out, Eunice said her father was in the market for a new pair.

Pass this article on if it made you laugh out loud!