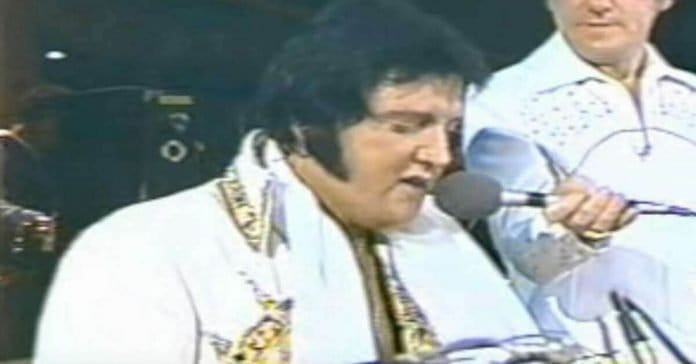 Elvis Presley is one of the few artists in history who stands the test of time. Timeless would be the word to describe his intoxicating music and personality.

Now that his last performance has resurfaced on YouTube, it depicts Presley’s greatness and ability to captivate an audience.

Mid performance Elvis sits behind the piano on the huge Rapid City stage and belted out an extraordinary rendition of his song “Unchained Melody.” This was the last performance where video footage was taken. Just six weeks later, Elvis passes away making this riveting performance even more special.

The passion he puts into this performance which he didn’t know would be the final one captured just shows that he always treat every performance like the last. Jack London was who released this footage and stated along with the upload:

“Elvis admired you, his heart always overflowed with love for his fans and admirers!

He needed to take painkillers just to make it through live shows, and even though his doctors wanted him to cancel them, he would always say: ‘No, there’s no way I’ll ever cancel my show, I won’t let these people down!’

Because of his heart, he would ask his doctors to provide him anything necessary to make allow him to get through each show.

They reluctantly agreed and would give him a few painkillers as well as steroids to aid him throughout every grueling performance! And the God above knows he did would endure it all. The pure talent he had came through despite the painkillers present in his system!

No pills were ver able to put his passion and talent to rest along with the will he had for performing to his amazing fans whom he admired so deeply!

Above his own life even! Presley was a truly beautiful human being and this world will never be able to replicate his good heart!”

Take a moment and watch Elvis’ final filmed performance. It is remarkable.