Home
Life Stories
This Man Is Traveling With His Wife. –


A man is travelling with his wife and mother-in-Iaw in Israel.

Sadly, the mother-in-Iaw passes away as they reach their destination.

The wife is struck by grief, and so the man takes it upon himself to arrange the funeral.

The wife silently hopes that they can bring the remains back to their home-country, but leaves everything in the hands of the husband.

He talks in depth with the local priest, who explains that arranging for the body to be flown over-seas would cost at least ten times the price of a local funeral.

At last, the husband tells his wife they will bring back the remains and have the funeral in the same graveyard as the late father-in-Iaw.

The wife thanks him, and feels some relief and happiness that everything worked out.

The priest tells the man he made a good decision, and asks what made him choose such a pricey option.

Had he been very close to the poor woman?

I’ve heard from the likes of you that someone died in this place and woke up three days later.

I’m not taking any chances.” 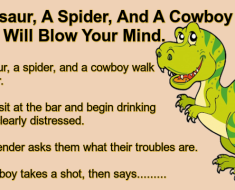