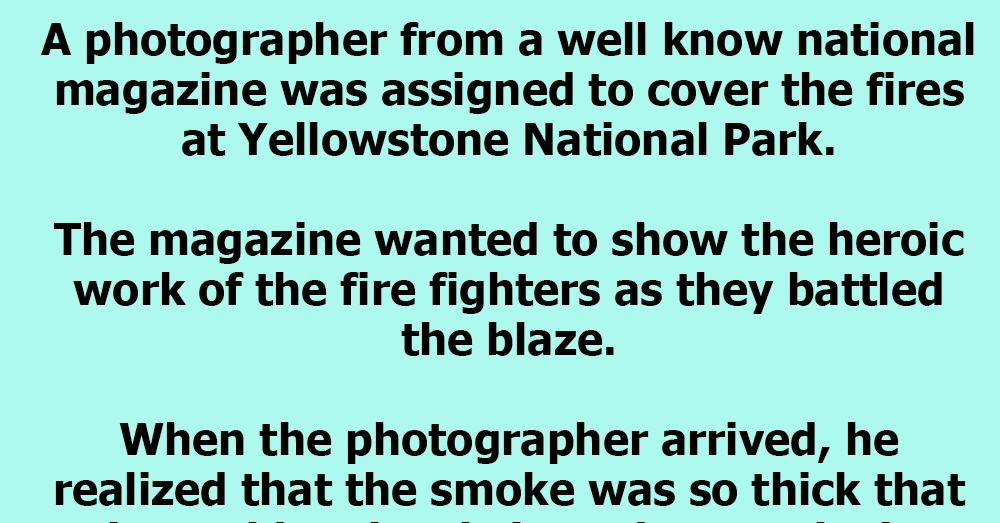 A photographer from a well know national magazine was assigned to cover the fires at Yellowstone National Park.

The magazine wanted to show the heroic work of the fire fighters as they battled the blaze.

When the photographer arrived, he realized that the smoke was so thick that it would seriously impede or make it impossible for him to photograph anything from ground level.

He requested permission to rent a plane and take photos from the air.

His request was approved and arrangements were made.

He was told to report to a nearby airport where a plane would be waiting for him.

He arrived at the airport and saw a plane warming up near the gate.

He jumped in with his bag and shouted, “Let’s go!”

The pilot swung the little plane into the wind, and within minutes they were in the air.

The photographer said, “Fly over the park and make two or three low passes so I can take some pictures.”

The pilot was silent for a moment; finally he stammered, “You mean you’re not the flight instructor?”

Bài viết Who On Earth Are You, Then? đã xuất hiện đầu tiên vào ngày Levanews.