Dads rule. But today, one dad in particular has our vote for Father of the Year thanks to a heartwarming video that shows him helping one of his daughters work through a bout of anger.

In the video, Randy Gaines is crouching down to speak to one of his daughters, who is sitting on a table, at eye level. 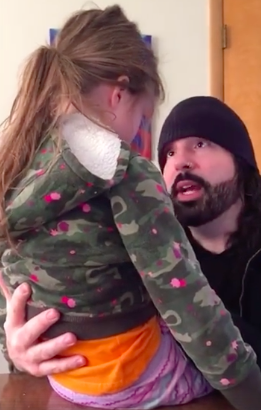 Okay, is that not the most excellent advice you’ve ever heard on how to deal with anger or sadness? We could benefit from it! But knowing that it was given in an exchange between a father and young daughter makes it so much better.

As the video goes on, you learn that Randy had been joking with his daughter earlier that day and called her a name he often kids with her about. But that day, she wasn’t having it.

Rather than telling her she was being unreasonable, Randy handled her feelings in the best way: by taking his own advice and talking through it. 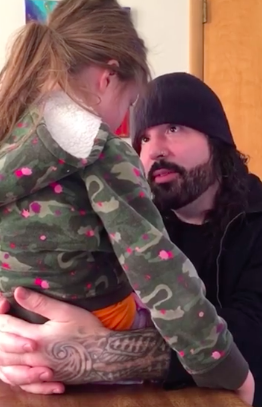 My heart explodes when he connects to his girls like this,” writes Randy’s wife in the video’s caption. “No yelling. No screaming. Talking. Discussing emotions and why we have such feelings.” The caption explains that neither Randy nor his wife saw this tenderness in their own childhoods, but together they’re teaching their girls they are “still loved no matter what.”

“I am so blessed and so thankful to have this man as my other half,” she writes. “Our girls are blessed to have him as their father. Thank you, Randy Gaines, for being you!”

Share if you think this style of parenting rocks!